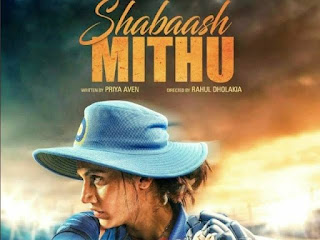 In Hindi cinema, a film has been made on the life of Indian cricketers like Mahendra Singh Dhoni, Mohammad Azharuddin, Praveen Tambe. It depicts his struggle to become a cricketer. Released last year, Ranveer Singh starrer 83 was based on the Indian men's cricket team winning the 1983 World Cup. For the first time on the cinematic screen, the film Shabaash Mithu has been made on the life of an Indian woman cricketer. The film is based on the life of former Indian women's cricket team captain Mithali Raj. Be it home or playground, women are fighting for the right to equality. Shabaash Mithu also reflects the discrimination and inequality faced by women cricketers.

There is a scene in the beginning of the film in which Mithali (Taapsee Pannu) says in front of the BCCI officials that Sir, we play for India only. We also have an identity. On this the BCCI official (Brijendra Kala) calls the peon and asks him to name the five women players. He can't even name one. From there the story comes to Mithali's childhood. Mithali's brother, who lives in Hyderabad with her parents and grandmother, wants to become a cricketer. Mithali's friend Noori introduces her to cricket. Both call each other as Sachin Kambli. His talent is recognized by coach Sampath (Vijay Verma) and starts training him. After joining the national team, young Mithali faces real difficulties. There the story progresses with incidents like the captain of the team and the players not treating her well, then becoming the captain of the team and fighting for the rights of women cricketers.

The film was initially directed by Rahul Dholakia. Later, Srijit Mukherjee took over the direction of direction. The story idea of ​​the film is by Ajit Andhare while it is written by Priya Avon. Sreejit Mukherjee has tried to raise many issues like women empowerment with cricket, discrimination against women cricketers, balancing personal and professional life of women with sports, patriotism. One scene in the film chronicles the fan's obsession with the Indian men's cricket team arriving at the airport and the apathy towards the female cricketers. At the same time, the person sitting at the counter does not care that it is a female player, he treats them like ordinary people. Similarly, in one scene, the old jerseys of male players are sent to the women's team by the cricket board. These scenes tell the agony and pain of every woman who has to face such treatment and disdain, due to the inequality and discrimination prevailing in every sphere of society. However, before the interval, the film accelerates like a T20 match. Later on, it slows down like a test match. The duration of the film is two hours 42 minutes. There was every possibility to reduce it with fine editing.

Among the cast, Taapsee Pannu has worked hard to become Mithali on screen. His hard work is reflected on screen. However, when his character decides to leave cricket at the peak of his career, the writer and director have not been able to make that moment effective. The story revolves around Mithali, not much goes into the lives of the rest of the players, but her love and struggles for the game are definitely told in the dialogues. The film depicts Mithali's journey from childhood to the year 2017.

However, there is no mention of the Arjuna Award and Padma Shri he received during this period. Child actors Inayat Verma and Kasturi Jagnam have done a great job in the film. Vijay Raj is good in the role of coach. At the end of the film, when the Indian women's cricket team reaches the World Cup, the match has been galloped forward when it needed to be shown in an exciting way. The background music used to create emotion and drama in the film is very loud. The countrymen have a passion for cricket. The challenge of the filmmaker is to make it exciting, despite the predictions of what is going to happen on the playing field. The director and the writer have not been able to meet this criterion. However, Mithali's journey has to be seen despite some flaws.

Popular posts from this blog